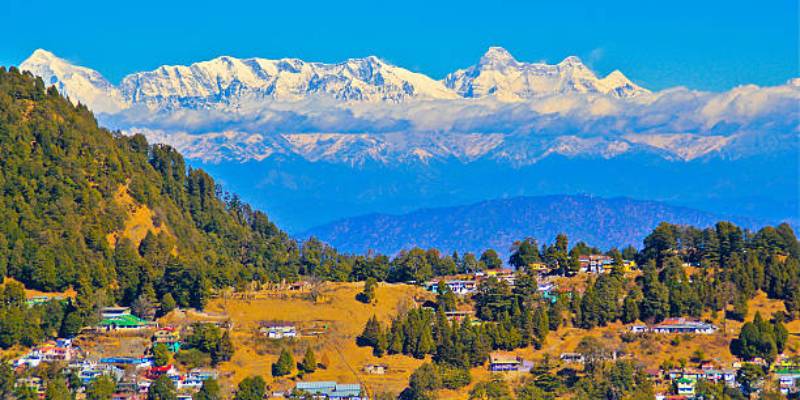 Uttarakhand is a beautiful state of India and its capital is Dehradun. Uttarakhand is also famous as Devbhoomi or the land of gods. Uttarakhand has been carved out of the state of Uttar Pradesh, which was earlier also known as Uttaranchal. Uttarakhand is a place that not only boasts of the beauty of the Himalayas but also manifests a sense of cultural civilization and ethos. Tourists can also enjoy the beautiful experience of climbing the steep hills, slopes of the state along with oak, birch, silver fir and rhododendron.

Places to Visit in Uttarakhand

Rishikesh, located in the state of Uttarakhand and is known all over the world for the convergence of Ganga and Chandrabhaga as well as many ancient and grand temples at the foothills of Himalayas. Apart from this, the place is also the center of popular cafes, yoga ashrams and adventure sports. Rishikesh is a unique place of spirituality and adrenaline pumping. Over the years, Uttarakhand's popular tourist destination Rishikesh has also been developed as the center of adventure sports of India.

Nainital is one of the most beautiful tourist places in the state of Uttarakhand, which is a quaint hill station situated amidst the Kumaon hills. It is also known as 'Naini Lake'. Known as the natural beauty and the city of lakes, Nainital in Uttarakhand exudes a charm with snow-capped hills and serene lakes. Adventure activities can also be done in Nainital.

Mussoorie has managed to attract tourists from all over the world for it’s beauty and peaceful location. Mussoorie, also known as the "Queen of the Hills", is a tourist destination located in the middle of the foothills of the Garhwal Himalaya range. The height of Mussoorie is about 7000 feet above sea level. Experiences a cool and pleasant climate throughout the year.

Badrinath, a tourist destination of Uttarakhand, is one of the four pilgrimage sites located on the peak of Neelkanth mountain in the middle of the Nar and Narayan mountain ranges. Badrinath Dham is a pilgrimage site dedicated to Lord Vishnu which hosts lakhs of pilgrims every year. Badrinath Dham is also mentioned in various Vedas. Badrinath, a tourist destination in Uttarakhand, is particularly related to Lord Shiva because of its mention in Hindu mythology.

Haridwar, one of the seven holiest cities in India, is a beautiful ancient city located on the banks of the Ganges River in the Garhwal region of the state of Uttarakhand. Haridwar is a city endowed with ashrams, temples and narrow streets. Lakhs of devotees come to take a dip in the holy river Ganges. The world famous Kumbh Mela is organized every twelve years in Barahridwar. Tourists come from all over India to attend and enjoy the Kumbh Mela. Apart from Haridwar, Kumbh Mela is held in only three cities of India, Prayagraj, Nashik and Ujjain.

Yamunotri has become a special tourist destination for the devotees as the origin of the Yamuna river and it is one of the smaller Char Dham. Located at an altitude of 3293 meters, Yomunotri Dham is situated in the lap of Garhwal Himalayas. According to Hindu mythology, Yamuna as Yama's sister is revered as the god of death. It is also believed that taking a bath in the Yamuna can make death at the end of life painless.

Kedarnath, a tourist destination in Uttarakhand, is popular for its ancient Shiva temples, pilgrimage sites, Himalayan ranges and mesmerizing landscapes. Kedarnath Temple is surrounded by Chorabari Glacier and Kedarnath peaks. Kedarnath has innumerable mountain ranges along with snow-capped peaks.

Gangotri is another pilgrimage site located in Uttarkashi, a place of interest in Uttarakhand. There is a long queue of tourists coming here. Mythological stories suggest that after the penance of King Bhagirath centuries ago, the goddess Ganga flowed into herself as a river to wash away the sins of her ancestors. But to reduce the velocity of the water falling from a height, Lord Shiva absorbed that water in his hair. The origin of the river Ganges is also called Bhagirathi.

Best Time To Visit In Uttarakhand

How To Reach Uttarakhand

If you have chosen a train to go to Uttarakhand, then let us tell you that there are some important junctions here. Such as – Haridwar, Dehradun, Rishikesh, Nainital, Kotdwar, Kathgodam, Pauri and Udham Singh Nagar are included. All these railway stations are well connected to other cities of the country like Delhi, Varanasi and Lucknow. So you can choose any station as per your convenience. Kathgodam and Tanakpur railway stations act as the gateway to the Kumaon region of Uttarakhand.

Uttarakhand is very well connected by road to major cities of India. Therefore, Uttarakhand is easily accessible by road as well.