8 Must Visit Places in Jammu & Kashmir 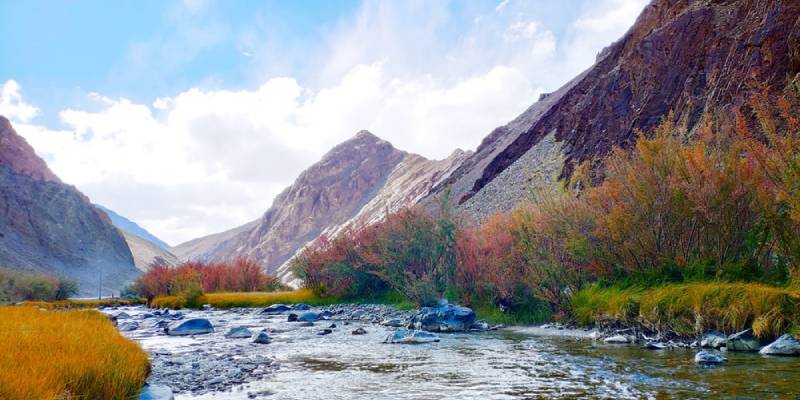 Jammu and Kashmir is the northernmost part of India. Embedded in the Himalayan Mountains, there is a lot to see from the Kashmir Valley to lush green valleys and water lakes to the snow-capped deserts of Ladakh. There are old Buddhist monasteries in the Ladakh region, old temples and mosques in Jammu and Kashmir. I have included ten selected locations in Jammu and Kashmir in this article.

The Martand Sun Temple is located in the village of Matan near Anantnag in the Kashmir Valley. This huge sun temple was built by King Lalitamaditya Muktpeed of Kashmir about 1300 years ago. Although the temple has been largely destroyed, architecture and sculptures from that time can still be seen here. The carvings on the huge stones and pillars are amazing. The construction of the temple is believed to offer glimpses of Kashmiri architecture as well as Greek architecture. This old temple is located about 2 kilometers from the new Sun Temple in Matan village.

The Avantiswamy Temple is located in Avantipur in Anantnag, Kashmir. This temple of Lord Vishnu was built by King Avantivarman in the 9th century. Avantivarman was the founder of the Utpal dynasty. Traces of the art of that time can be seen in the carvings engraved on the walls. There was a main temple on the high platform in the middle. Four small temples were built at the four corners of the temple. This temple on the banks of the Jhelum must have been quite large in its day. It is believed that the temple was destroyed during the flooding of the Jhelum River. The temple is on the road from Srinagar to Pahalgaon.

Gulmarg from the Kashmir Valley is a treasure trove of natural beauty. In winter Gulmarg is covered with white snow, in summer with green grass. Regardless of the season, its beauty does not diminish. The climate of Gulmarg is excellent to spend a few days in peace. Come here and enjoy the gondala ride or spend time with nature. Gulmarg is part of the best ski area in the world, so this sport can also be learned here in winter. Gulmarg is about 50 km from Srinagar.

The city of Srinagar is known as Dal Lake. The lush green hills and colorful shikaras in the lake add even more to its beauty. Dal is not just a lake, but a floating city. Where thousands of people live. Dal also has its own market and schools. Pie fields are Dal's greatest specialty that can be tied up and carried anywhere. If you want to enjoy the Dal to the full, you need to spend a few days in a houseboat. These houseboats have been in Dal since the British times.Mughal Gardens

The Mughal Gardens of Srinagar rival the beauty of Kashmir. These gardens were laid out based on the Charbagh style of Persian architecture. Right-angled cutting paths, canals that flow through the gardens, water fountains create a different world. This can be enjoyed by sitting under the poplar trees planted in the gardens. These gardens were laid out by the Mughal emperors around 400 years ago. Shalimar Bagh, Nishat Bagh, Chashmeeshahi, these three Mughal gardens still exist in Srinagar.

Have you imagined sand dunes amidst cold, rough mountains at an altitude of 10,000 feet above sea level? It is one of the main attaractions of the Leh Ladakh Road Trip Hundar area of Ladakh's Nubra Valley is a wonder of nature. It seems as if you have come to Rajasthan filled with sand dunes. In the same desert, two humped unique camelian camels are also found. Apart from the dry, barren Ladakh, Nubra looks quite green. Along with this, 350 year old diskite is the identity of Buddhist monastery Nubra.

Pahalgaon is a well-known mountain station in the Kashmir Valley. Surrounded by high hills and green pastures, pahalgam can be felt in nature. The side-flowing Lidder River adds even more to its beauty. There are several valleys to see near Pahalgam, the most popular of which is the Aru Valley. Pahalgam can be visited at any time of the year. Pahalgam is also an important station for Lord Shiva's Amarnath Yatra. The traditional Amarnath Yatra route passes through Pahalgam. Pahalgam is about 90 km from Srinagar.

Marga means meadow. Sonamarg in the Kashmir Valley is full of these green meadows. There are several glaciers near Sonmarg that are covered with snow all year round. This will start a number of tracking routes in Sonamarg. For lakes such as Gadsar, Krishnasar, Satsar and Gangabal, which were built on the heights of Kashmir, monitoring is carried out from Sonamarg. Sonamarg Nala lies on the banks of the Sindh. Rafting can also be practiced on the fast waters of this river. Sonamarg is located 80 km from Srinagar.